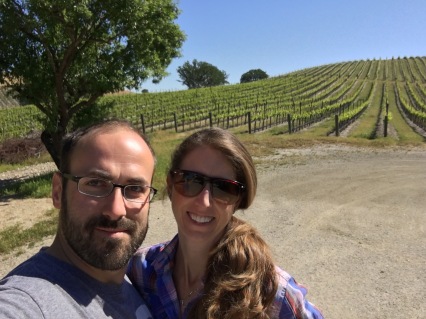 A big hello from Hollyhock Vineyard to our 600+ readers.  As a reminder you can subscribe to updates via email on the right hand side.  Apologies on the delay in updating it has been a crazy few weeks with the recent Hospice du Rhone event (topic of next post) and Bill getting a new ‘day job’.

As you can from the picture of Julie and I with the Mourvedre bloc the vineyard is in full growth mode!  It is exciting times.

nino that ended up being a bit more temperamental with only spurts of rain.  One of the major side effect of this weather was the earliest bud break ever recorded in Paso Robles.  Early by a whole 2-3 weeks.  Bud break is when the grapevine has been dormant/sleeping for the winter and starts to wake up.  The vine begins drawing water from the soil and growing the buds until they burst into new shoots and leaves.  On the right is a picture of a young Grenache vine whose bud had burst open into small leaves and a baby shoot (the stem).  This picture was taken in mid February.  Happy Valentines day!  Early bud break by itself isn’t a bad thing by itself.  Jason Haas at Tablas Creek does a good job describing how if the weather remains warm and tropical due to el nino everything will be fine (Budbreak, 2015: Early, like 2014. Cue the frost alarms. – Tablas Creek).  However, this can be a very sensitive time for the young fragile new shoot.  If frost does come, the shoots haven’t hardened off yet and they can easily be damaged and die.  Why is this bad, won’t more just grow back?  Yes and No.  Unfortunately the buds that will create ‘fruiting’ shoots/canes (the stems) are actually developed last year and are only sprouting now.  If those die then any new shoots are unlikely to create fruit at worst or product it late or at a much lower yield at best.  For the impact that can have just look back to 2011 and the worst case scenario in our Small Vineyard Business Plan.  Instead of an average yield of 18 tons of Grenache only 5 tons was harvested.  This is a difference of $26,000 (13 tons * $2000) and wipes out your entire profit and puts you into the red.

As new owners we were crossing our fingers

that bad luck like that happens only once a decade and we would get beginners luck.  For weeks we were safe and temperatures hovered in the low 40’s.  Until one afternoon we get the following text…. “burned”…. “frozen”… “No we can’t do anything, try again next year”.  Doh!

Grape Growing is definitely a business where you have no periods of no action and then 4 hour bursts that make or break your entire year (frost, harvest).  Game over, try again next year.

I am a glass half full kind of guy which is a good balance to Julie whom I affectionately refer to as being “Hampty” (Glass Half Empty).  Maybe it is the Maine’ah in me but when hit with a bad situation just assess the damage, figure out what is in your control and what isn’t.  We immediately looked at our satellite maps to see how bad it was and how much actually got hit with the frost.   Our top block is our Morvedre and the lower block where the house is contains the Grenache.  The red areas are below the Walnut tree and the low depression area next to our neighbor.    It was here that the cold air rushed down from the hills and settled creating the frost.  Glass half full = ‘Oh, thats not too bad, it is only about 5-10% of our harvest, we aren’t that $%&!’ed”.  I won’t share what the Humpty view was 🙂 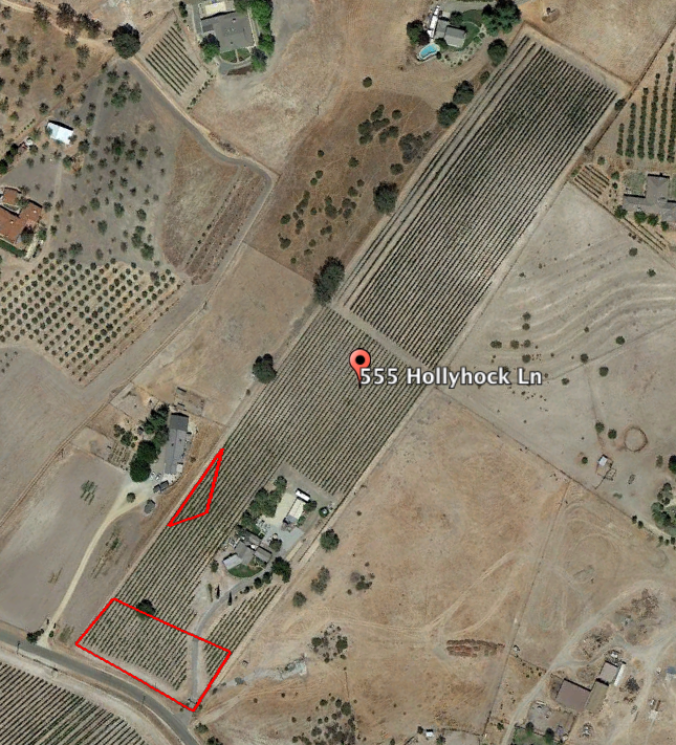 Grenache is the closer block where the house is.

So what does frost look like?  Below is one of the mature Grenache vines.  On the left you can see brown curled up leaves and brown dead stems.  You can also see a frost damages shoot above the new baby ones on the right.  Grenache is a very vigorous vine and loves to grow.  That is a good thing.  The bad thing is that those new shoots are not in ideal position.  They are on the underside of the vine rather than the top.  That means they will have a harder time being sturdy and carrying what ever fruit may grow.  It is geometry and mechanics.

A bit further up the hill on the border of where the frost occurred is a younger replacement Grenache vine.  Here you can see on the right that all of the shoots were burned and died.  On the left those new buds hadn’t burst until after the frost hit and are growing as normal.

Happy our trusty golden retriever is out there to let us know it is all ok (and campaigning to be included in the next Wine Dogs coffee table book https://www.winedogs.com)

So where do we go from here?  Well, you irrigate that area a bit, cross your fingers, hope you get some fruit out of that section, and then plan for next year.  Another shout out to Tablas Creek and their entry on Frost Damage and Recovery.  Amazingly and thankfully they are one of the few wineries/vineyards out there posting information on these topics that growers like us can leverage.

Of course, these secondary buds are not always in the places you’d prefer, and it means a summer for the vineyard crew of carefully selecting which canes are allowed to grow and which will inhibit the air flow around the vines and have to be removed.  On the positive side, all of the rain that we received last winter means that the vines grow vigorously, and should have enough energy to spare to still produce decently off the secondary buds. (2011)

Juan, Dee (our consultant), Jordy (Tablas Creek viticulturist) will need to brainstorm on frost protection strategies for next year.  Most likely we will put in some sprinkler systems.

So what is next?  Shoot thinning!  This is when you go vine by vine and pluck off the new baby shoots that you don’t want.   “Why would you do that?!  Don’t you want all the shoots you can get so you can grow the most fruit and make the most profit?”  Actually no.  If you look back at the Small Vineyard Business Plan it calls out the concept of yield vs. price.  The less yield you get the more concentrated the grapes and flavors.  That is why some bottles cost 2 bucks (chuck) and some are $45.  That is because some vineyards grow 20 tons of fruit per acre and some do 2.

At Hollyhock vineyard each vine (trunk) has 2 arms (the vines going sideways).  Each arm has about 4 spurs (last years shoots that were trimmed back to a stub).  Each spur is trimmed back so that there are 2 buds on it that will grow into a shoot (the green vines you see growing straight up with leaves).  Each shoot can carry 1-2 clusters of fruit on it.  What happens is that even though you may trim back last years shoots to only 2 buds, vines are vigorous creatures and tend to still put out lots of new shoots in unexpected places.  Right now while they are short (6-18″) you are able to go vine by vine and pluck off the extras so you only keep the two best upward facing strong shoots per spur.  It is best to do it early because if you allow them to grow the unwanted shoots will tangle with the desired shoots and it becomes much more labor intensive to pull them off and it increases the likelihood you will break or damage them.

Shoot thinning is one of the major activities in the vineyard for the spring (pruning, shoot thinning, mowing), this will be followed by canopy management and dropping fruit later in the year.  Since this activity is very labor intensive and time sensitive (the shoots are growing!) we will be bringing in a small labor crew of 4-5 additional people to help Juan.

The Mourvedre block growing well with shoots about 12″ long.

A Mourvedre shoot.  If you look close enough you can see the berry clusters already forming!  The shoot is the green stalk.

Thanks for checking in on the vineyard and we will post again this weekend on the Hospice Du Rhone event and the helpful culture in Paso!

Thanks everyone for the great reception.  So far we have had over 575 unique visitors from 22 different countries.  As a reminder you can subscribe on the right to get email updates of all new posts or follow us on twitter @HollyhockVines and on Facebook.

Following our last post, Small Vineyard Business Plan, was the topic of financing the vineyard.  Today we will cover the types of loans and pros and cons.   This is an area where I am not a complete expert but will endeavor to share what we learned.   However, financing is highly variable and each lender has their own criteria.  This is where an experienced commercial realtor or contacts you make at other local vineyards and wineries can really provide value.

When you go to qualify for the loan banks will always want to be sure you aren’t stretching beyond your means.  This usually means that your Debt to Income ratio must be under ~43%.  Thus you have two options: 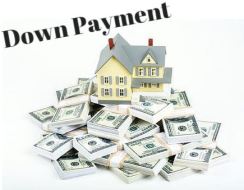 Let’s assume your debt to income checks out and you can afford to pay the monthly financing costs (plus farming costs covered in Small Vineyard Business Plan).  Now you will need to pay for the 35%-50% downpayment.  What are your options?

All of these options can drastically restrict the type of vineyard + house properties you can buy.  Think of these scenarios and the impact:

As you can see there are a lot of factors that go into financing a house + vineyard and it is dependent on the amount of cash you have on hand or access to, your personal income, the rental income, the farming income, and the type of loan you would like.  I am sure there are many more options and it would be great to hear about them in the comments section.

Julie and I will be down at the vineyard Thursday evening for the Hospice Du Rhone seminars.  Unfortunately we will be assessing our first major setback – FROST!   This was one of the primary dangers we observed in our Small Vineyard Business Plan and we hit it. Stay tuned for pictures and commentary from the vineyard coming next week! 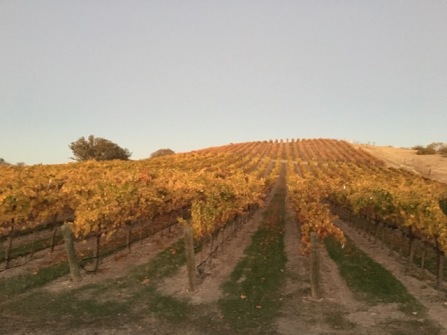 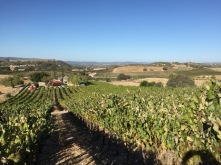 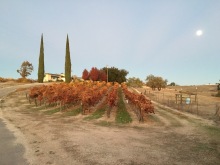 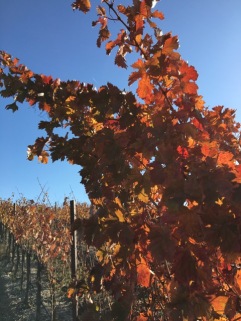 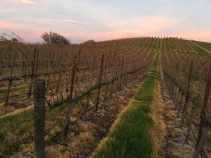 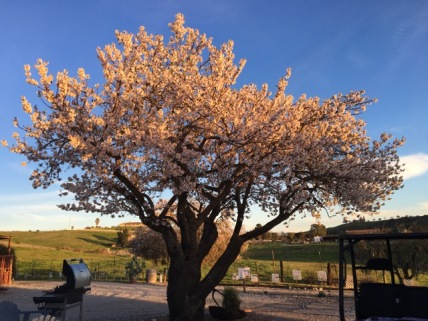 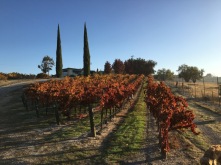 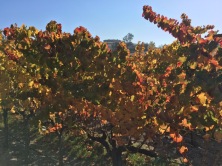 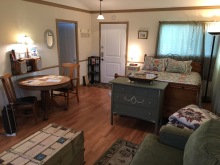 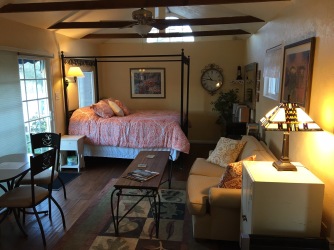 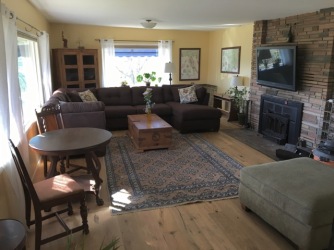